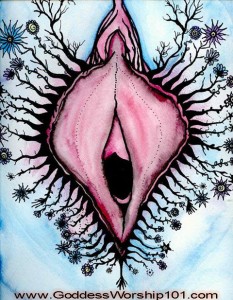 Consider this: In over five million years of human evolution, only one organ has come to exist for the sole purpose of providing pleasure – the clitoris.  It is not required for reproduction.  It doesn’t have a urethra running through it like the penis, and thus, does not urinate.  Its sole function – its singular, wonderful purpose – is to make a woman feel good!!
Sadly, it is precisely because the clitoris has no function apart from female pleasure that science has neglected to study it as intricately as the penis.  In my last post I wrote about Princess Marie Boneparte and her revolutionary work on the female orgasm.  There was however, one piece of pertinent information she was lacking that science had not yet discovered: the true size and scope of the clitoris.
Try asking the next person you encounter to tell you where the clitoris is located.  Having posed this question to others many times myself, I’ll guess that the majority of answers you receive will sound something like, “It’s that small bulb at the top of my lips,” or, “That’s the button up under the hood.”  Although these responses aren’t exactly wrong, the interesting truth is that the majority of the clitoris is actually within the pelvis – that is, it’s far more internal than external. Even most of the women I coach, women who are generally worldly and well-informed about their own bodies, react with a combination of fascination and confusion when I explain that their clitoris extends deep within them.
The scientific name for the external “little button” or “bulb” is glans.  Not to be confused with glands, glans simply refers to a small circular mass.  This little structure contains approximately 8,000 sensory nerve fibers; more than anywhere else in the human body and nearly twice the amount found on the head of a penis!  From reading her work, it’s clear that Marie Bonepart mistakenly thought that the clitoris was completely comprised of the glans; and because it is super sensitive and all anyone can see of the organ, her confusion is mirrored by most women today.  The fact is, though, that most of the clitoris is subterranean, consisting of two corpora cavernosa (corpus cavernosum when referring to the structure as a whole), two crura (crus when referring to the structure as a whole), and the clitoral vestibules or bulbs.
The glans is connected to the body or shaft of the internal clitoris, which is made up of two corpora cavernosa.  When erect, the corpora cavernosa encompass the vagina on either side, as if they were wrapping around it giving it a big hug!

Sketch of an Erect Clitoris

The corpus cavernosum also extends further, bifurcating again to form the two crura.  These two legs extend up to 9cm, pointing toward the thighs when at rest, and stretching back toward the spine when erect.  To picture them at rest, imagine the crura as a wishbone, coming together at the body of the clitoris where they attach to the pubic symphysis.

Near each of the crura on either side of the vaginal opening are the clitoral vestibules.  These are internally under the labia majora.  When they become engorged with blood they actually cuff the vaginal opening causing the vulva to expand outward.  Get these puppies excited, and you’ve got a hungrier, tighter-feeling vaginal opening in which to explore.

What does all this mean?  Well, for starters, we can finally end that age-old debate of vaginal vs. clitoral orgasms.

Then in 1970, Germaine Greer published The Female Eunuch, which scoffed at Kinsey’s theory.  She wrote, “It is nonsense to say that a woman feels nothing when a man is moving his penis inside her vagina.  The orgasm is qualitatively different when the vagina can undulate around the penis instead of a vacancy.”

Interestingly, they’re both right.  The vagina is not the sole source of arousal, though to stimulate the inner clitoris you can greatly do so by manipulating, displacing, and exploring the vagina with a penis or other apparatus.

Sketch of an Erect Clitoris

Many women can bring themselves to orgasm without ever inserting anything inside of themselves.  They are causing their internal clitoris to become erect and likely stimulating their glans, bulbs, and crura by rubbing themselves on the outside.  The corpus cavernousum is the additional erectile tissue encompassing the vagina, and greatly erogenous when stimulated internally.

Let’s also remember, female orgasm is not solely about the clitoris and vagina either.  It is far more complex and also involves the workings of multiple nerves, tissues, muscles, reflexes, and mental effort.  Some women can think themselves to orgasm.  Others can orgasm simply by flexing their pelvic muscles.  Considering all the components involved plus the variability of human beings and their anatomies, it’s extremely important to remember no two people are the same. What works for one woman may not work for another.  In other words, it’s all custom under the hood.

What really blows my mind is the plethora of misinformation that exists in textbooks, professional medical guides, and on the internet.  Take for example, in one of my undergraduate textbooks titled Understanding Human Sexuality, the clitoris is depicted merely as just the glans.  The sad fact is it wasn’t until the 1990’s that researchers began using MRI to study the internal structure of the clitoris.  By then, the intricate details of the penis were already well known.

Urologist Helen O’Connell of the Royal Melbourne Hospital set out to better understand the microscopic nerve supply to the clitoris using MRI, something that had already been done for men with regard to their sexual function in the 70s.  In 1998 she published her findings, informing the medical world of the true scope and size of the clitoris.  Yet ironically that same year, men in America began popping Viagra to cure erectile dysfunction.

Sketch of a Clitoris at Rest

In 2005 The American Urological Association published one of Dr. O’Connell’s reports on clitoral anatomy.  The report itself even states, “The anatomy of the clitoris has not been stable with time as would be expected.  To a major extent its study has been dominated by social factors … Some recent anatomy textbooks omit a description of the clitoris.  By comparison, pages are devoted to penile anatomy.”  The report also mentions how seemingly impossible it is to understand the internal structure of the clitoris with just one diagram.  Several are required to truly get a comprehensive understanding of it.

Alas it wasn’t until as recent as 2009, French researchers Dr. Odile Buisson and Dr. Pierre Foldès gave the medical world it’s first complete 3-D sonography of the stimulated clitoris.  They did this work for three years without any proper funding.  Thanks to them, we now understand how the erectile tissue of the clitoris engorges and surrounds the vagina – a complete breakthrough that explains how what we once considered to be a vaginal orgasm is actually an internal clitoral orgasm.

Dr. Foldès has been performing surgery on women who have suffered from clitoral mutilation, restoring pleasure to over 3,000 circumcised patients.  He also gets passionate about the lack of study with regards to the clitoris:

“When I returned to France to treat genital mutilation, I was amazed that they were never tried. The medical literature tells us the truth about our contempt for women. For three centuries, there are thousands of references to penile surgery, nothing on the clitoris, except for some cancers or dermatology -and nothing to restore its sensitivity. The very existence of an organ of pleasure is denied, medically. Today, if you look at the anatomy books that all surgeons have, you will find two pages above. There is a real intellectual excision. “

So there you have it.  As if all the repression, cultural influences, guilt, childhood imprints, and fear of being our true selves center stage in society weren’t enough, we also have the politics of medicine keeping us in the dark.  The great news is that researchers like Dr. Buisson, Dr. Foldès, and Dr. O’Connell are paving the way for greater knowledge … and greater pleasure!

Now for something a little less serious and more fun!  Here is a video of artist and sex educator, Betty Dodson, drawing the internal clitoris.  Note: the glans are accidentally labeled “glands” in the video, but remember the proper term is glans!!  Enjoy!